Improving the Childcare Experience with the Power of Streaming Video 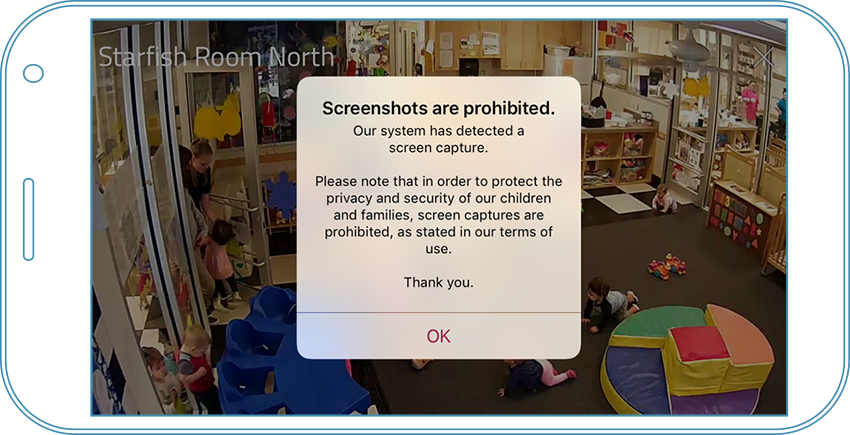 We've launched a feature that detects and protects against screenshots and video recording on the WatchMeGrow app.

The privacy of children in your care is so important. That’s why we have terms of service that prohibit users from taking screenshots or recordings of video streaming from your school. By adding a feature that detects and protects against screenshots and video recording, we’re doing even more to protect privacy.

Due to the differing capabilities of iOS and Android, the feature works differently between the two mobile platforms. Specifically:

For iOS Users: The new feature prevents recording video. It also detects when a screenshot is taken within the app, and immediately displays a message indicating that screenshots are a violation of our terms of service. Users must click "OK" to resume use of the app.

For Android Users: The new feature prevents recording video, and prevents screenshots of video from being taken within the app.

Is the feature in place for all users?

The feature is live for all users of our latest iOS and Android apps. There is no action required to turn it on.

Are users notified with a message that they cannot take a screenshot or record video?

Does this work differently for admin users of the app?

The feature is active for parent users only. Admin users are able to take screenshots.

Our development team continually adds new software features based on our customers' needs. As we innovate, this feature and others will evolve to include even more ways to help you run your childcare business better.

Connected devices can pose a risk of unwanted access. Know the critical questions to ask to be sure your streaming video system is safe and everyone's privacy is protected.

This growing family of 23 early learning centers uses WatchMeGrow as a tool to make sure there is quality and consistency every day, in every classroom, at every school. Find out how they've reached their success.

Internet connected devices in your school—including video cameras—can leave your customer data vulnerable. We take more precautions than any other streaming video provider to ensure that you won't have to worry when you use our software. Our newly-published white paper on video and data security gives you a primer on this important topic that is vital to the health of your business.

Our warranty is comprehensive and covers the replacement of equipment, usually within 48 hours, including technician travel for repairs. If you’re unsure whether your WatchMeGrow system has warranty coverage, we can help.

How to Turn Helicopter Parents into Co-Pilots

Teachers know that children need the freedom to experience a range of emotions to help them develop into happy, independent students. We work with thousands of schools and have gathered the best advice to help communicate effectively with families on this topic and have a healthy, prosperous business.

How to Secure Your Childcare Center: Added Value of a Web Camera System

WatchMeGrow offers all the functionality of a high-end security camera system within your system to help run your business better and more safely.

Turn “I’ll think about it” into “When can we start!”

Your lobby makes a great first impression with every touring family that comes through your doors. Add this beautiful poster to market your streaming video-and it's free!

Recruiting new families is not the only way to grow your business. Each enrolled family you can retain for the long term means more profit for your bottom line. We've got three easy ways to delight them and help them want to stay.

Got great teachers? Retain them for the long term

Retaining your best staff is the key to building success. If you have a strong team of superstar teachers, use these tactics to keep them for the long term.

How to Build a Team that Values Punctuality

Punctuality is a valuable trait that helps your business run better and increases your bottom line. Try these steps to build a team that is on time , all the time.

When a Touring Family Says “No Thank You”

In any sales situation, having a plan for what to do if your service is declined can make it easier to handle. And it can give you productive ways to win their business in the future.

We've compiled some topics for staff interviews that can help align your school's goals with those of your prospective new teacher.

Your School’s Guide to Millennial Parents

You’ve read about them, you’ve met them, you might even be one of them. Millennial parents are one of the most studied and storied groups of consumers in history. And they are your primary customers.

Know the Questions to Ask: Prevent Unsecured Streaming Video in your School

How secure is the streaming video you have or that you’re considering installing at your school? This school in North Carolina unknowingly used a system that was not secure, and the results are incredibly concerning for the families and for the business.